It is worth noting that we had several outstanding candidates apply for the 2022 Scoville-Meno TCGA Scholarship awards.

Thank you to the Scoville-Meno Family of Dealerships for their generosity and support of Junior Golf in the Triple Cities!

Below is a bit more about this year’s recipients, Michael, Dominic, and Cal. 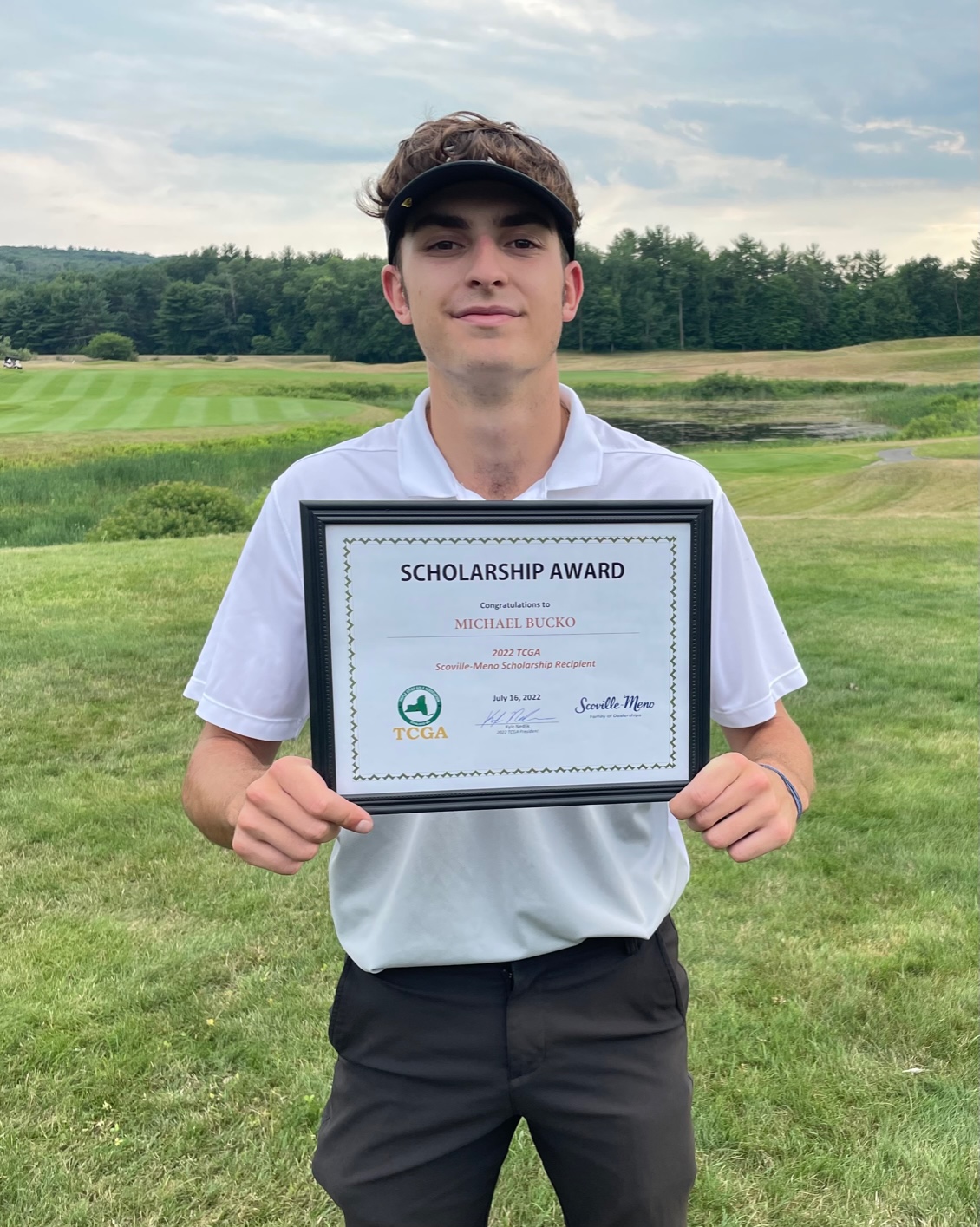 Michael began playing golf at 3 years old and has continued playing ever since his late father first introduced him to golf, as well as basketball and baseball. While he has always enjoyed playing all 3 sports, Michael feels he has always had the strongest connection to golf. Growing up playing golf with his sister and dad has contributed to his love for the sport while also giving him a connection to his father. Without his stepfather Dave taking him out to play and practice every day, Michael feels he wouldn’t be the player he is today. Michael was on the Seton varsity golf team from 7th grade on. During his time on the team, he was the low medalist for the Section IV Championship 3 times, and the STAC Championship once. He also received the Section 4 Sportsmanship Award his Senior year. Michael will be continuing his education and golf career at St. Bonaventure University. He says that without his family’s support and his personal dedication to golf, he wouldn’t be where he is today.  Michael is thankful for this scholarship and feels that golf has helped to shape him into the person he is today by teaching him focus, discipline, patience, structure, and perseverance. Congratulations Michael Bucko! 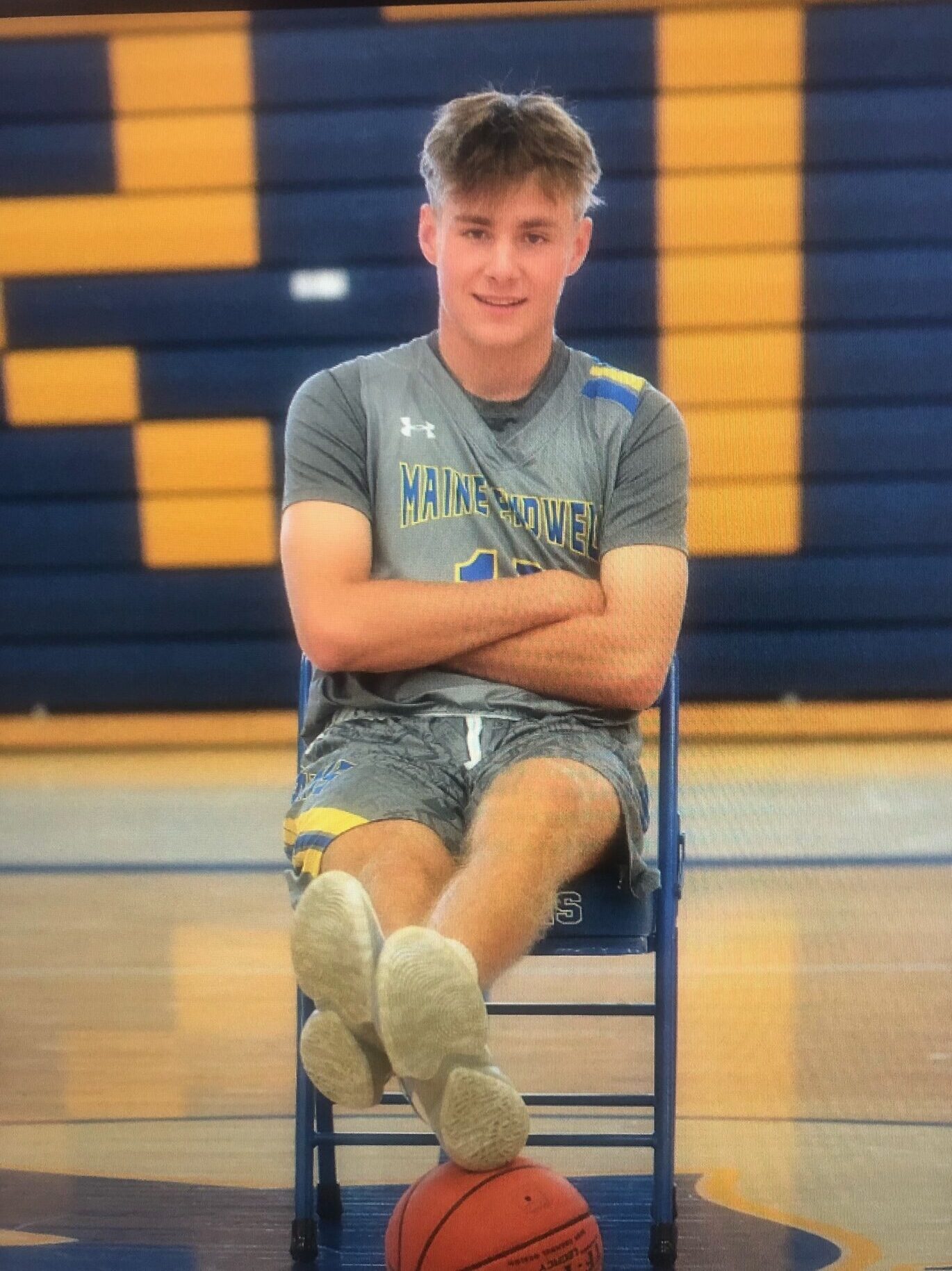 Dominic will be attending Bloomsburg University beginning in the Fall of 2022 and plans to major in Finance. He was a 5-year starter on his High School team and won three Scoville-Meno TCGA Junior tournaments throughout his junior TCGA tenure. Dominic was also the Section 4 Player of Year in basketball and was selected to the basketball All-State Class A 3rd team in 2022. Dominic will continue playing basketball and golf during his time at Bloomsburg University and is thankful for the opportunity to receive this scholarship. Congratulations Dominic L’Amoreaux! 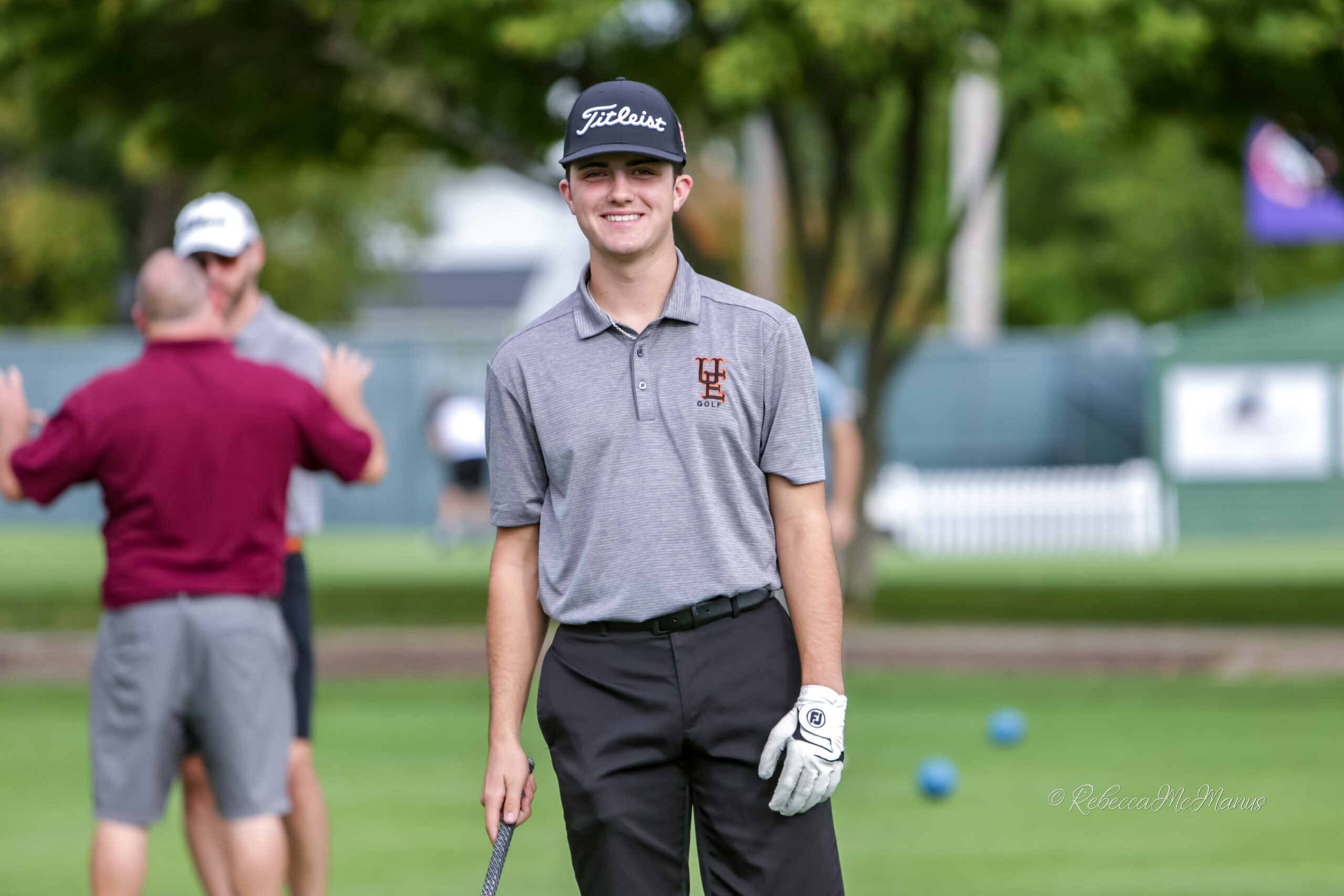 Cal played on the Varsity Union-Endicott Golf Team for 6 years. During his Senior year at U-E, he received the Nick Dinunzio award, and made the All-Conference team.  Cal will be attending St. John Fisher University in the Fall of 2022 and is continuing his golf career playing on the university’s men’s golf team. Cal would like to thank the Scoville-Meno family of Dealerships and others who have supported him for this opportunity. Cal is honored to receive the scholarship, and notes that it will help a great deal in the upcoming year as he begins college. Congratulations Cal Machalek!

The TCGA would like to extend their gratitude to the main sponsors during the 2021 season that have agreed to support us again in 2022! 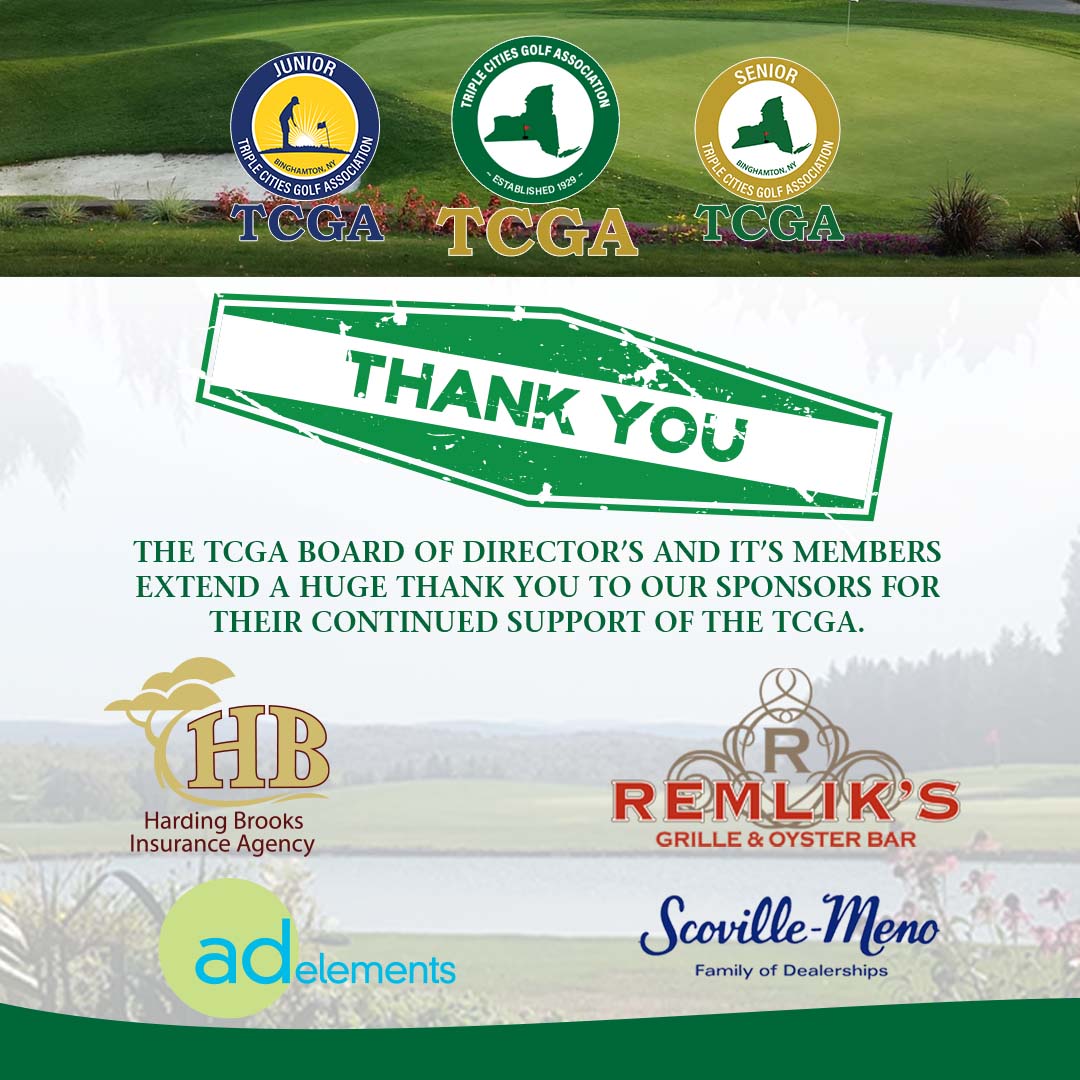 The Scoville-Meno Family of Dealerships will continue their multi-year support of the TCGA junior golfers! This year we will be awarding two $500 scholarships to high school seniors and will run a 5-7 event Junior Tour thanks to the generosity of Scoville-Meno.

Ad Elements will continue their support of all of our initiatives through assisting with graphics, other services, and additional financial sponsorship. Thank you to Ad Elements for your generosity!

Thank you to all of our sponsors for their commitment to growing golf in the Triple Cities!

Any organizations that are interested in partnering with the Triple Cities Golf Association should email tcgagolf@gmail.com to discuss potential opportunities. 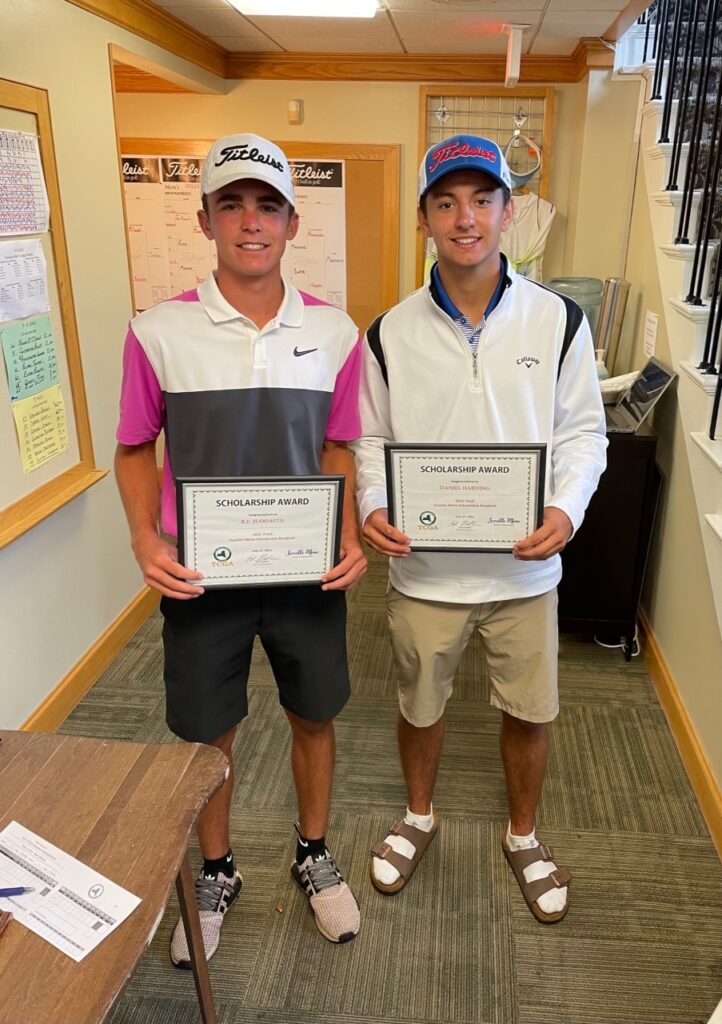 It is worth noting that we had several outstanding candidates apply for the 2021 Scoville-Meno TCGA Scholarship awards. Below is a bit more about this year’s recipients, R.J. and Daniel
RJ Juodaitis 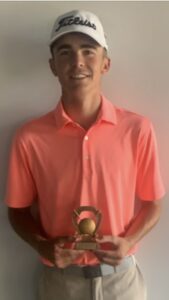 RJ Juodaitis, son of Rich and Joli Juodaitis, is a 2021 graduate of Union Endicott High School. RJ was a 3-sport athlete, playing golf, baseball, and basketball. He finished 16th in his class and was a member of National Honor Society and Key Club. He will attend St. John Fisher in the fall where he will be a member of the Cardinals golf team and major in Accounting. His favorite golf memory was winning the recent TCGA junior tournament at Endwell Greens where he shot a career best 67. RJ would like to thank both the Scoville and Meno families for their continued support of junior golf, and the TCGA for selecting him as a recipient of this scholarship. Finally, he would like to thank Coach Morley for his guidance and support over the years. 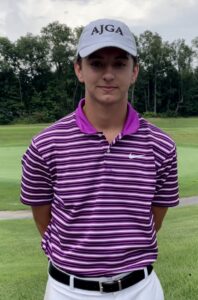 Dan Harding is a 2021 graduate of Vestal high school. Some of Dan’s accomplishments during his time at Vestal include: co-medalist honors at the 2019 Nick Dinunzio Tournament, a Section 4 Class A Individual and Team Championship, a 3.8 high school GPA, and 5 years on the starting varsity golf lineup at Vestal. Dan will be attending the University of Scranton, planning to major in business administration while playing on the university’s golf team, and is honored to receive this scholarship.
We are excited to announce that Scoville-Meno Family of Dealerships will continue their support of the 2021 TCGA Junior Tour and Scholarship Award! 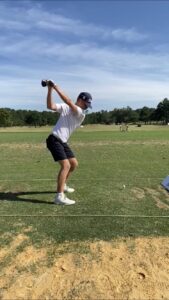 We had a number of great candidates apply for the 2020 Scoville-Meno TCGA Scholarship award this year! Samuel Taylor, an outstanding young student and golfer, is this year’s award recipient.

A little bit about Samuel:

Future Plans after graduation: Hopes to be a PGA Professional at a golf club in the South

Favorite Golf Memory: Playing in the final round along Evan Sitts and Hogan Bendert in the 2020 TCGA Amateur

Samuel would also like to include a huge thank you to Steve Scoville for sponsoring the scholarship, and the TCGA for selecting him to receive this scholarship. He also said, “It is such an honor to represent the TCGA and Scoville-Meno.” 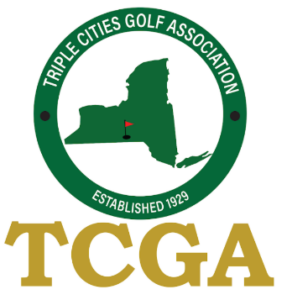 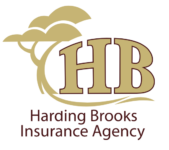 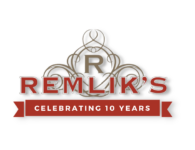